Vietnamese Government and the European Union (EU) began to conduct negotiations for the signing of the voluntary partnership agreements on forest law enforcement, governance and trade (VPA/FLEGT) since the end of 2010 to ensure the legality of timber and timber product exports from Vietnam to the EU Member States. The agreement is expected to be signed and implemented by the end of 2015. Accordingly, after the agreement takes effect, Vietnam commits to apply Timber legality assurance systems (TLAS) when exporting timber and timber products into the EU market.

In two days from 27 to 28 October, 2014, FLEGT Project in Central region in collaboration with Centre for Rural Development in Central Vietnam (CRD) and Consultative and Research Centre for Natural Resource Management (CORENARM) held a consultation workshop collect comments from the participants for recommendations to the negotiation and implementation of VPA/FLEGT.

In his workshop opening speech, Mr. Truong Si Hoai Nhan, the Project Manager, introduced some project activities implemented during the period from April to September in 2014, such as: Roundtable workshops on EU FLEGT action program; Action research on the impacts of illegal logging for long-term livelihoods of forest dependent communities; and community consultation for recommendations to the drafts relating to the definition of legal timber (LD) and the system ensuring the legality of the timber on the 04 provinces of Quang Binh, Quang Tri, Thua Thien Hue and Quang Nam.

The objectives of the workshop were to: (1) share the field investigation results having been implemented through activities such as round-table conferences, community consultation and action research; (2) collect opinions and points of views of forest dependent communities, enterprises, wood-processing facilities and other related agencies in 04 projected provinces to serve for the draft editing and amendment, and (3) determine the issues and make recommendations submitted to Vietnam Administration of Forestry (VNForest) for the draft served for the negotiation and implementation of  VPA/FLEGT.

The workshop attracted the participation of over 35 delegates from civil society organizations, wood processing enterprises, forest dependent community groups, and other relevant agencies of the 04 project provinces and special representatives of central agencies, such as Forest Protection Department, VNForest and the members of VNGO-FLEGT network. Besides that, the workshop was attended by central mass media agencies who reported on the workshop.

At the consultation workshop, the project advisory groups from the Faculty of Forestry, Hue University of Agriculture and Forestry and Consultative and Research Centre for Natural Resource Management (CORENARM) presented some results of the researches and community consultation at local areas, particularly the real situations, difficulties/challenges and solutions to each topic related to land use rights certificates and land use, the production of forest planting households and wood-processing ones; and the situation of illegal logging in the local areas during the last year. 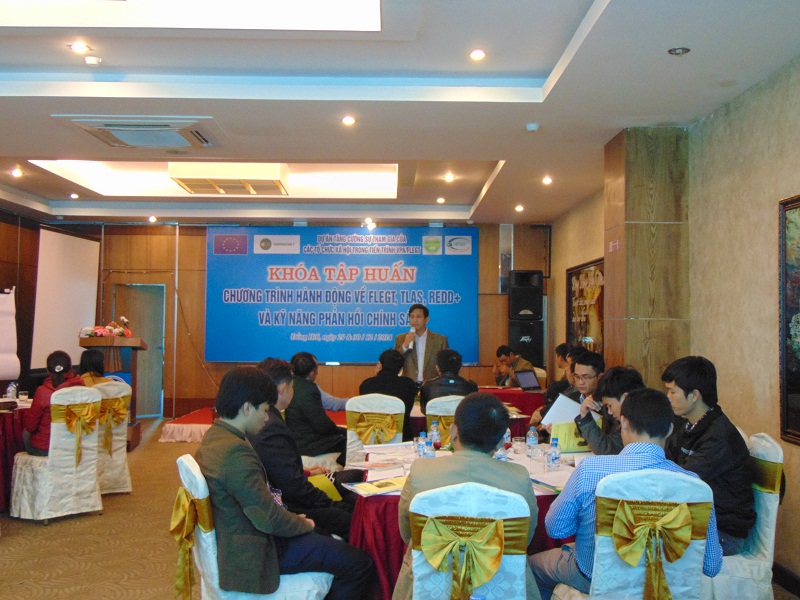 Picture 3: Overview of the workshop

Through the workshop, forest dependent community groups, wood processing enterprises, CSOs and related agencies shared their opinions about FLEGT-related issues and the potential impacts of VPA/FLEGT to the livelihoods of the households. They also gave some suggestions to complete the draft recommendations to the VPA/FLEGT negotiation process in order to minimize the negative effects of the process to the stakeholders as well as to enhance the capacity to adapt and take advantage of development opportunities when the agreement was made and implemented.

At the end of the workshop, FLEGT Project along with the advisory group summarized the comments, solutions and suggestions from group discussions in order to increase the ability to meet the requirements of VPA /FLEGT and particularly the recommendations submitted to the Vietnam Administration of Forestry in December 2014 for the negotiation and implementation of  VPA/FLEGT.