Determining the output market for agricultural products is one of “the top concern” of people as well as local enterprises. Recently, groups of agricultural production towards the market have been established in Trieu Van, Trieu Giang communes, Trieu Phong district and Hai Que commune, Hai Lang district. 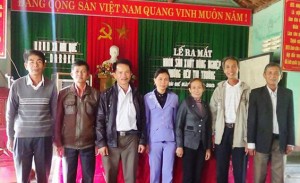 This is one of activities in the project “Strengthening adaptability and reducing climate change in agricultural production in sandy area of Quang Tri province” (FLC-01-12), is funded by Embassy of Finland and Centre for Rural Development in Central Vietnam (CRD) has implemented.

The established groups included members participating in the activities of agricultural production in the area, to cooperate and support each other in economic development, management and sustainable use of agricultural production models, market connections and transaction of products through the groups. The groups have also helped the members to access sources of technical assistances, social services and professional development credits.

With support from the project, there are 7 groups established, including 2 groups in Trieu Van, 2 groups in Trieu Giang and 3 groups in Hai Que, averagely, there are 30-40 members per group. To support maximally people, the project has also organized several supplementary activities such as training on marketing and planning business for the group; introduction of planning production and business for the group; networking groups and businesses…

The groups have operated under the leadership of the Party and the CPC, Management teams, although newly established, the groups have brought faith to the people in sandy area of Quang Tri. In the next time, the project will continue supporting the people to build and develop these groups to improve incomes and solve output for agricultural products. /.