Study tour 4 models of child protection in the Central Highlands

From 12 to 16 December 2017, the Child Rights Governance Network in Central Vietnam (CCRG) hold a study tour for the network members to visit 04 models of child protection in three provinces of Kom Tum – Gia Lai and Dak Lak.

Organized by the Center for Rural Development in Central Vietnam within the framework of the Project “Strengthening the capacity of civil society organizations on Child Rights Governance – Phase 2” funded by Save The Children, the tour attracted 15 participants from the network member organizations from Quang Binh, Thua Thien Hue, Da Nang and Quang Nam. 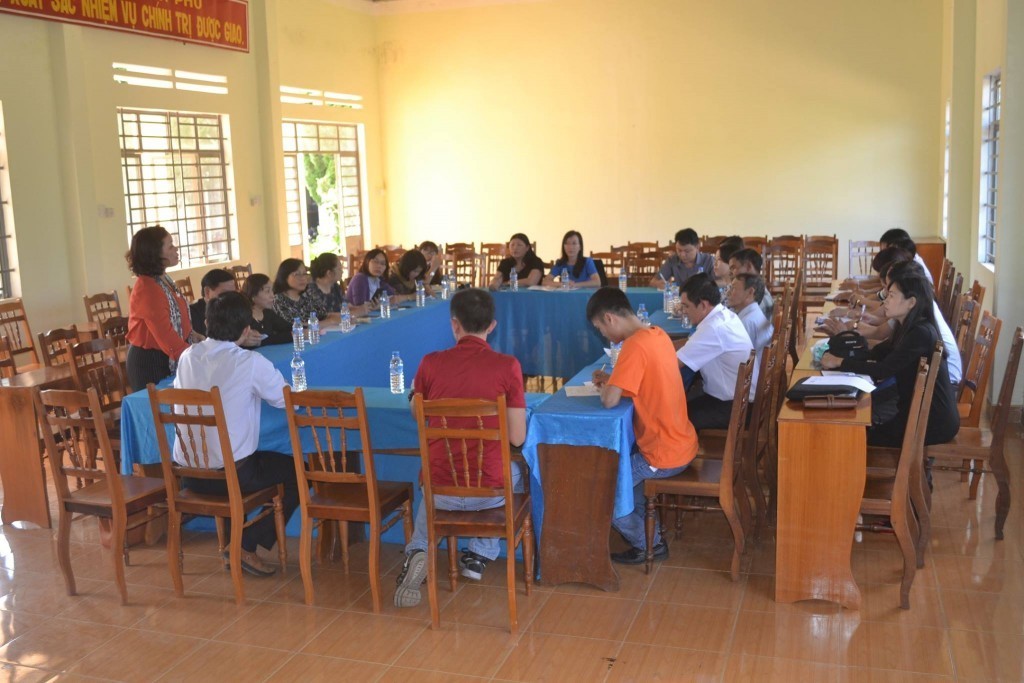 Picture 1: Visiting and working with the People’s Committee of Hoa Phu Commune
In Hoa Phu Commune, the visitors met, discussed and listened to various interesting information from the Steering Committee of the model “Safe home for child accidents and injuries prevention”. The set-up and implementation of the model received great concern from the participants, specifically the establishment of Steering Committee, the application of evaluation criteria, the monitoring and outcomes of implementation, and the survey on the people’s knowledge. Besides the model, the visitors also found it interesting to explore indigenous knowledge of the land home to the ethnic minorities of Jrai and Bana. As revealed by the village heads and commune leaders, the percentage of physical and humiliating punishment on Jrai, Bana children is even lower than that on children in Kinh’s families. 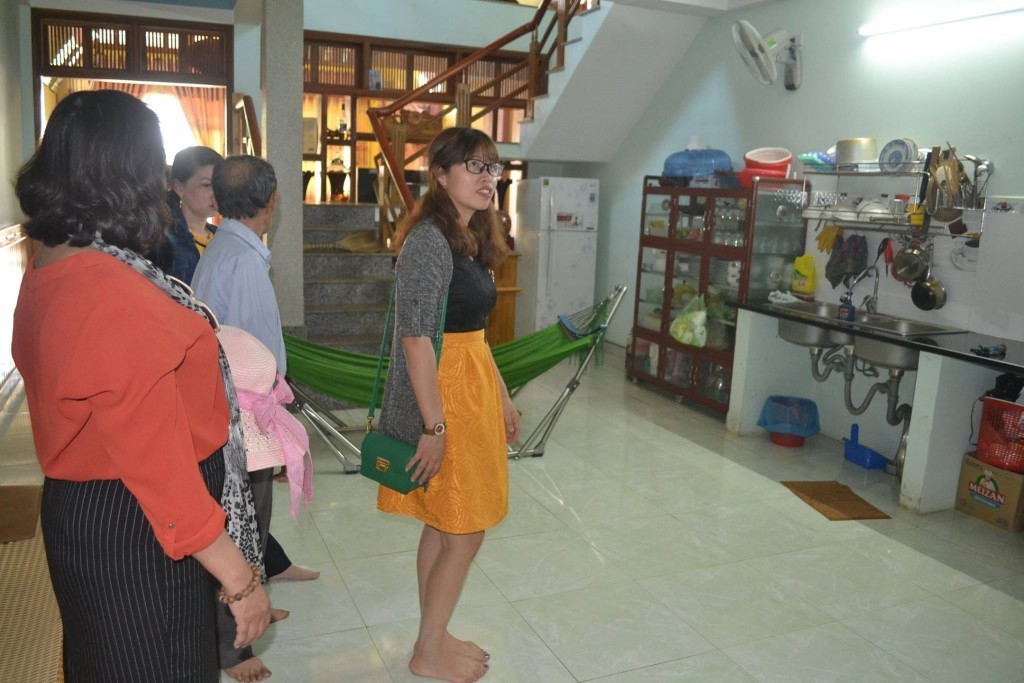 After working with the Steering Committee, the visitors came to visit the families applying the model of safe home for child accidents and injuries prevention. Through discussions with the head of household as well as through observation, it was noticed that the majority of the risks that cause injuries to children such as sharp objects, knives, scissors, and electrical appliances were put high; the yard was carefully built to minimize the risk that children fall. Noticeably, Hoa Phu commune is the hot spot of Chu Pah District in terms of traffic accidents the majority of victims of which are children. That is the reason why most families pay due attention to safety factors when building door, gate and fence.

Leaving Hoa Phu Commune, on December 14, the group visited the Department of Labor, Invalids and Social Affairs (DOLISA) of Kom Tum province to study the interdisciplinary work presented by the department leaders and the representatives of centers and organizations working in the field of Child protection.

At the meeting, the group listened to a really adequate and detailed report by Ms. Huynh Thi Kim Lien, Head of Chamber of Child Affairs, DOLISA, on case management in 2017. The report provided significant information about the implementation of social work at province and city level. Many precious experience and skills on providing consultation for autistic children, orphaned children, children at risk of dropping out of school, traumatized children, abused children, etc. was shared.

Picture 3: Ms. Huynh Thi Kim Lien report on case management in 2017
The visitors also got to know a case of a 11-year-old Jrai girl (11 years old) who was sexually abused by her own 16-year-old brother. The girl and her family had been promptly consulted on how to avoid physical and emotional injuries and also how to help her psychologically prepared for involving in the confrontation in court.

The core child protection group
In the afternoon of the same day, the group moved to Dac Ruong commune, Kon Ray district, Kon Tum province to attend a meeting of the Core Child Protection Group at primary school.

The event was held at the community cultural house, which attracted not only the visitor but also a number of Xo Dang people, mainly young mothers and children. 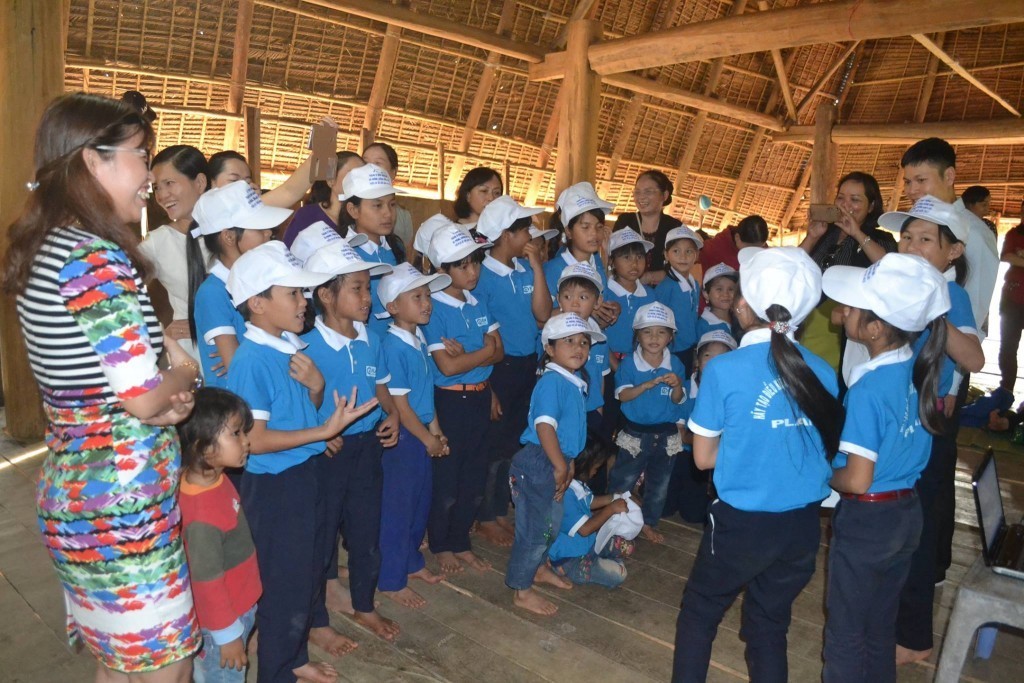 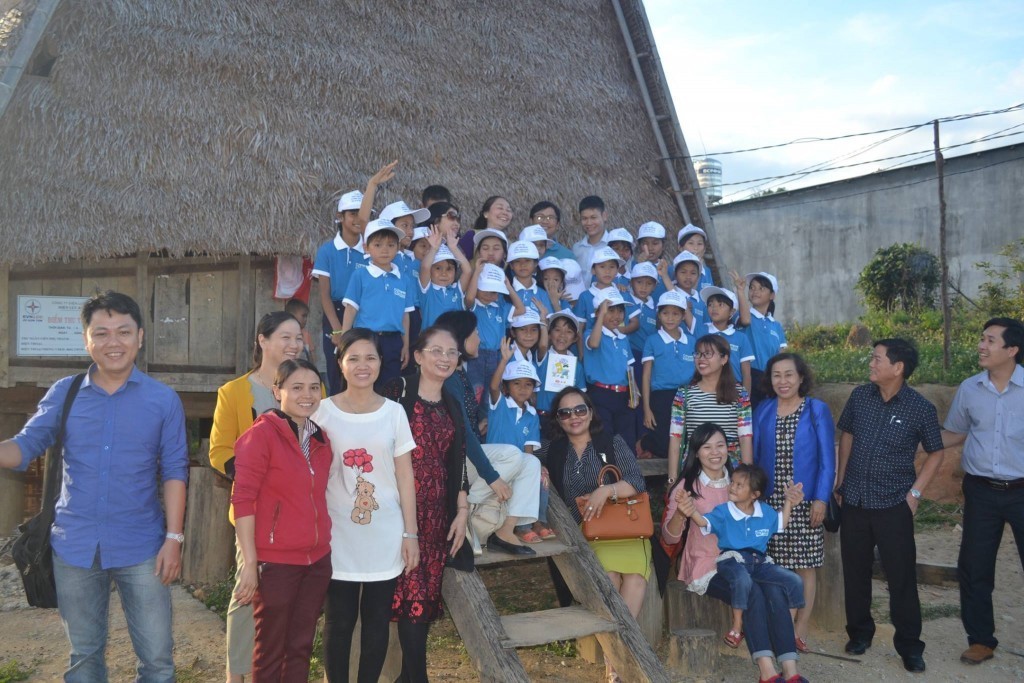 Picture 5: Taking a souvenir photo with the members of the Core Child Protection Group

The children in the core group organize the group activities by themselves. The group elected one group leader to manage the group. The main activities of the meeting this time were very well conducted with these following main contents: reviewing the topic of the previous meeting (child marriage), dancing, discussing about solutions to help friends who dropped out of school, who were beaten or forced to get marriage early by parents.

The children were equipped quite adequately with basic knowledge of self-defense, self-confidence to talk and raise their voice in public.

Managed by Nun Thich Hue Huyen, Buu Thang pagoda is currently a shelter for 47 orphans with different stories. Some are children with disabilities; some were abandoned from their single mothers who could not afford to keep them, yet the nuns tried to keep them alive by taking care of their mother until she giving birth.

The nuns have been trying their best to make a home for the children which has dining rooms, bedrooms, a clinique room, a playground, a carriage for the children to go to school and to prevent them from feeling self-pity.

Despite their desire to give help to more cases, just like other any other centers and facilities, Buu Thang II pagoda is facing a number of difficulties such as tuition fees, costs for education and health, etc.
“Although the tour only lasted for 5 days with 4 destinations, it did bring about unforgettable experiences and sense of love and responsibilities for future generations. The lesson learnt throughout the journey will definitely help in the planning and implementation of activities of our organizations as well as of the network in the coming time. In addition, this is also a great opportunity to build up connection and understandings among the network members”, said Mr. Nguyen Thanh Hien, the project coordinator after the study tour.