On the morning of July 23rd, the workshop to launch the project “Associated agriculture for long-term income stabilization of ethnic minorities and equal integration in community development in Vietnam” took place in the Convention Center of Nam Giang district. The Center for Rural Development in Central Vietnam (CRD) and World Vision Vietnam collaborated with the People’s Committee of Nam Giang district to hold this activity.

Photo no.1: Overview of the workshop

The workshop welcomed over 80 participants who are representatives of all communes, town and sub-departments of Nam Giang district, Quảng Nam province; leaders of Departments of Foreign Affairs, Science and Technology, Agriculture and Rural Development; Hue University of Agriculture and Forestry, a number of companies and cooperatives for agro-forestry services in Nam Giang, Phú Ninh and Điện Bàn districts of Quảng Nam province and Đà Nẵng city and BigC supermarkets in Đà Nẵng and Huế cities.

At the workshop, after the representative of Nam Giang district People’s Committee announced the project approval decision, the donor’s representative presented the grant logo for the project. Next, the CRD’s director introduced brief information of the project and shared experiences in developing livelihood models on agriculture linked to markets. WVV’s representative also summarized the roles and responsibilities of stakeholders in the project. 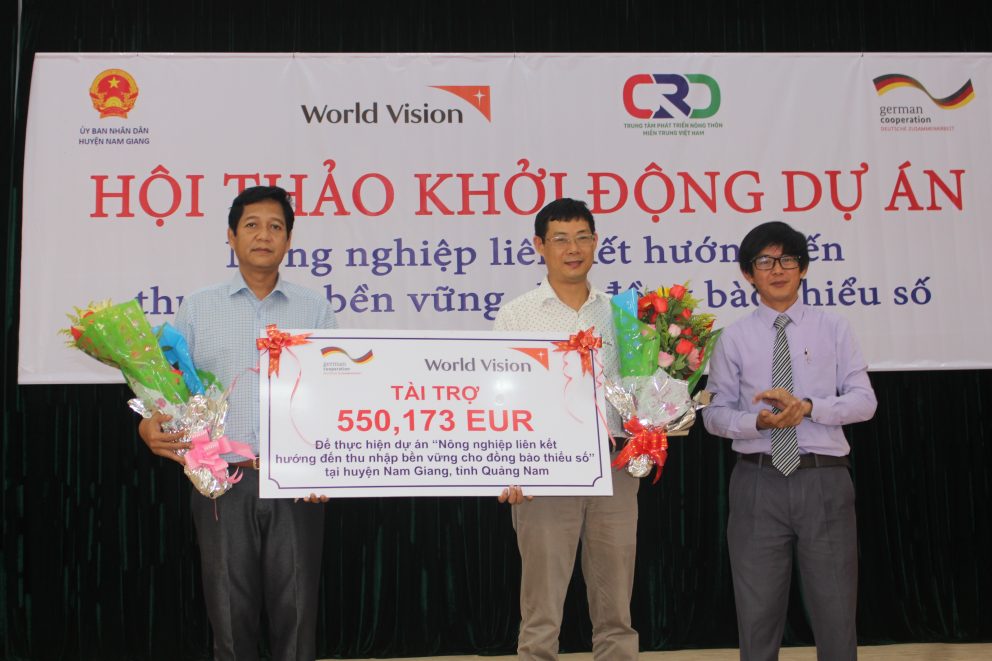 Photo no.2: The donor’s representative presented the grant logo for the project

The workshop received more than 20 comments from 15 representatives representing all participants that expressed their interest and support for the project. Many comments brought helpful advice for units on methods and approaches to successfully implement the project.

In addition, the workshop also provided spaces for communes and town to set up stalls and display their local specialities and agricultural products. This is a valuable opportunity for producers to introduce products and connect with enterprises. 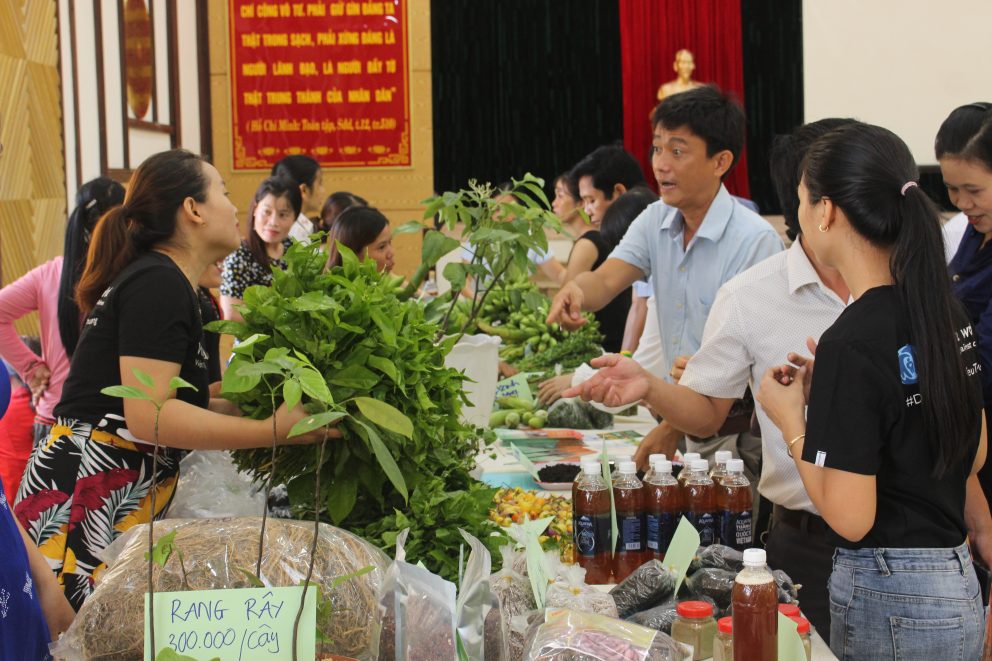 Photo no. 3: Agricultural products on display at the workshop

Mr. Lê Văn Hường, Secretary of the Nam Giang district Party Committee highly appreciated the contents and approaches of the project. “I hope the project will reach further outcome, not only with black pig raising model. Enterprises must accompany Nam Giang people in product consumption” said Hường. Simultaneously, Hường gave several guiding ideas for the parties to participate in the project and suggested sub-departments at district and commune levels “to really get involved in” the project. He affirmed “The district is committed to accompany the project“.

On behalf of the organization board, Mr. A Viết Sơn – Vice Chairman of Nam Giang district People’s Committee commented that the project’s idea is completely suitable with the context and policy of Nam Giang district, particularly when the One Commune – One Product (OCOP) programme is promoted. Sơn directed departments, functional agencies, project implementation units to coordinate and provide maximum professional assistance and legal support for the project to achieve the goals.

The inception workshop has widely publicized information to beneficiary communities and related partners, and received consultations from stakeholders for the implementation plan in the first year.

Photo no.5: A group photo of participants at the workshop