On October 28, 2021, the Centre for Rural Development in Central Vietnam (CRD) organized the closing workshop for the project “Strengthening the capacity of civil society organizations on child rights governance” funded by Save the Children in Vietnam. The workshop marked the end of a 5-year journey of promoting effective implementation of the United Nations Convention on the Rights of the Child and the Law on Children of Vietnam with hundreds of project activities in 4 provinces of Quang Binh, Quang Tri, Thua Thien Hue, Quang Nam and Da Nang city. More than 60 participants from social organizations, communities and schools and numerous students representing thousands of students who are direct beneficiaries from the project participated in the workshop. Also, members of the Child Rights Governance Network in Central Vietnam joined the workshop online and offline.

The project has been implemented in 4 provinces of Quang Binh, Quang Tri, Thua Thien Hue, Quang Nam and Da Nang city between July 2017 and October 2021. The target beneficiaries of this project are children, especially disadvantaged children including adolescents at risk of abuse, lesbian, gay, bisexual, and transgender children and child victims of bullying, gender-based violence, and physical and emotional punishment. Besides, the social organizations which were involved in the activities, have benefited from the project.

Within the project, the Child Rights Governance Network in Central Vietnam (CCRG) has been established with the participation of 12 social organizations and 12 clubs in communities and schools. In addition, CRD organized 10 training courses, 4 workshops, one study visit and 15 thematic conferences for the network.

CRD also cooperated with the network members including the Association for Empowerment of Persons with Disabilities of Quang Binh province, the Women’s Union of Quang Tri province; Thua Thien Hue Association for Protection of Child’s Rights, the Football for All in Vietnam project, the Centre for Social Work of Da Nang and Quang Nam to organize communication activities, dialogues, moot court, and communication design competitions. Besides, CRD supported to implement community initiatives to promote the application of positive discipline and end all forms of physical and mental punishment. 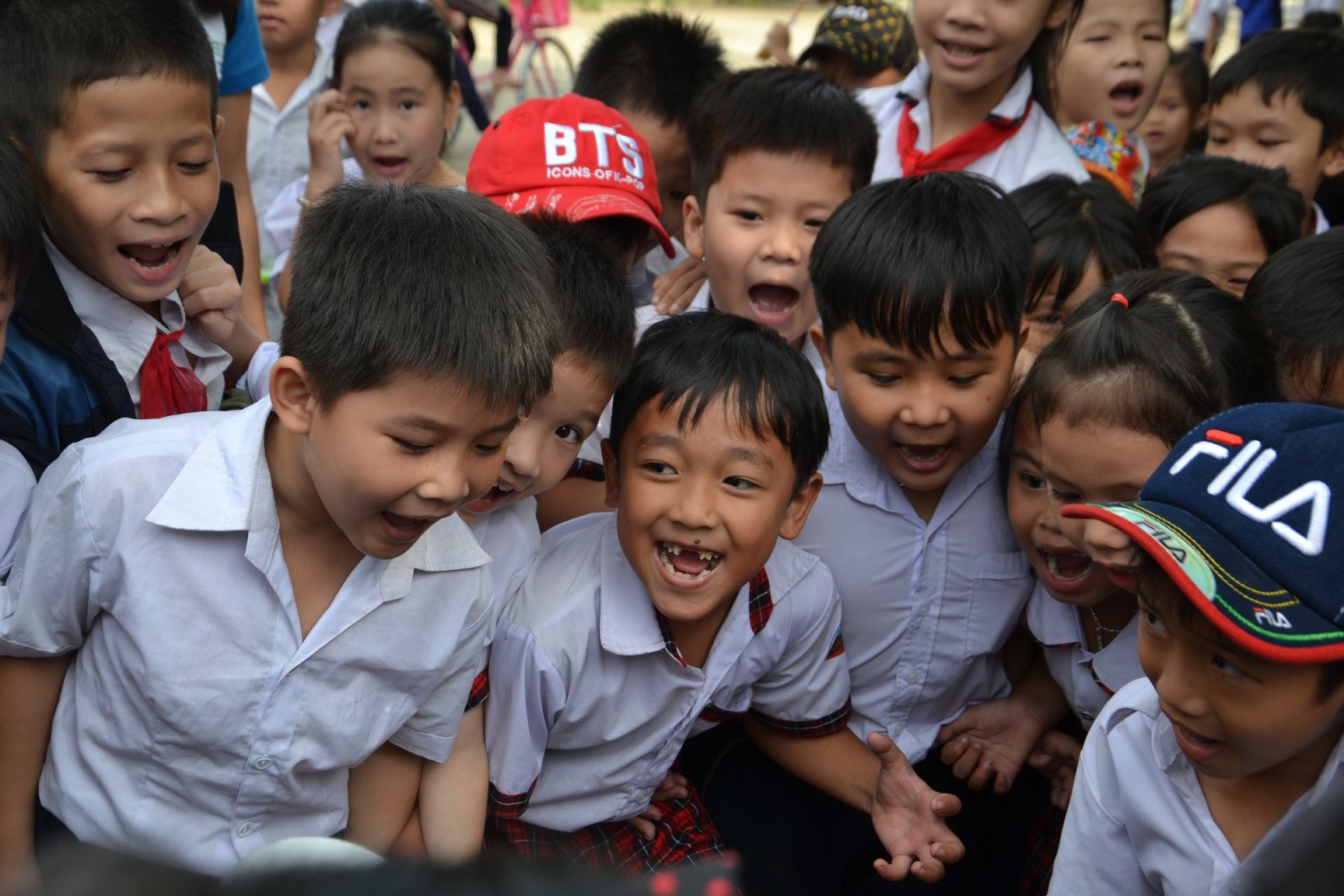 The project has opened a new stage in the journey of promoting the effective implementation of the United Nations Convention on the Rights of the Child and the Law on Children of Vietnam.

One of the outstanding results of the project is that children through social organizations along with the State agencies have required the government to implement actions about child rights. This resulted in the children forums at different levels, a dominant activity which was implemented by CRD and other organizations in the network. The ideas, desires, questions and suggestions of children about children issues have been responded by leaders of state management agencies. Specifically, 90 students from lower secondary schools representing nearly 1.6 million children in 9 districts, towns and city in Thua Thien Hue province participated in the dialogue and received direct responses from the leaders. The child forum 2021 in Thua Thien Hue province was chaired by Mr. Phan Ngoc Tho, the Chairman of the Provincial People’s Committee.

The Offical Dispatch No. 2343/UBND-LDTBXH dated September 13, 2021 of the People’s Committee of Tam Ky city addressing children’s recommendations in the Children Forum 2021

In the closing workshop, Mrs. Dang Thi Lan Anh, the project coordinator reported on the outstanding achievements of the project. Specifically, through the establishment and development of the CCRG, social organizations (SOs) in the region have improved their capacity and strengthened the cooperation to organize dialogues between children and authorities to resolve issues related to ensuring children’s rights and promoting the abolition of physical and mental punishment against children. In addition, through the SOs, children can participate in dialogues with the State agencies to ensure the implementation of actions to enforce children’s rights. Parents, teachers, and caregivers have better understood the consequences of physical and mental punishment on children and adopted positive forms of discipline as alternatives to traditional disciplinary actions. 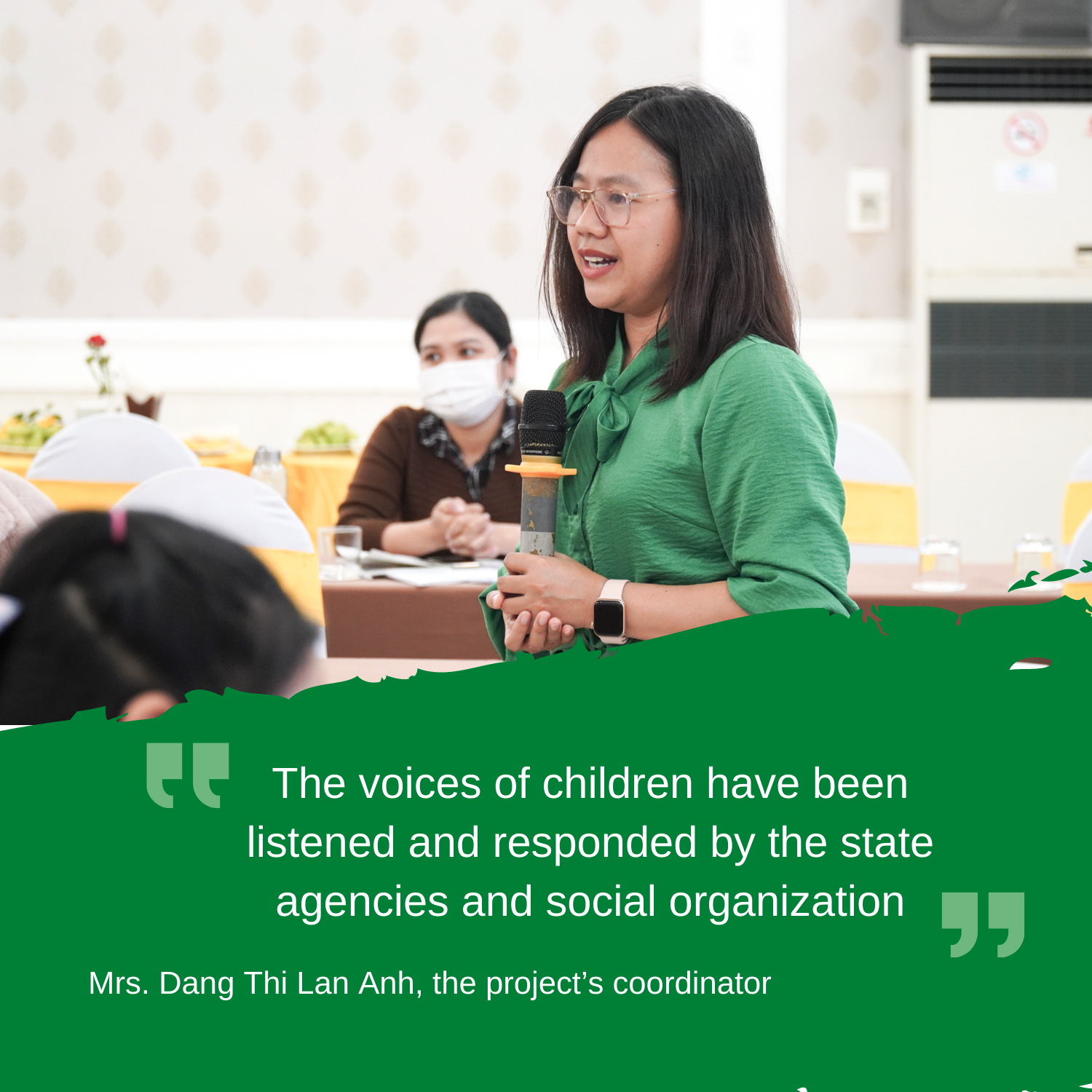 Also in the closing workshop, representatives of parents’ club including Mrs. Tran Thi Dao from the Good Parents Club in Kim Long ward,  Mr. Ngo Hoang Giang, the principal of Thuy Phu lower secondary school, Mrs. Nguyen Thi Hoa Phuong, the vice principal of Hai Ba Trung upper secondary school shared the results and experience learnt from the project models such as school dialogues, parents clubs, promoting the child participation in developing and assessing communes and wards suitable for children and in supervision of the construction works for children. By this way, participants in the workshop will understand clearly about the implementation methods of these models. 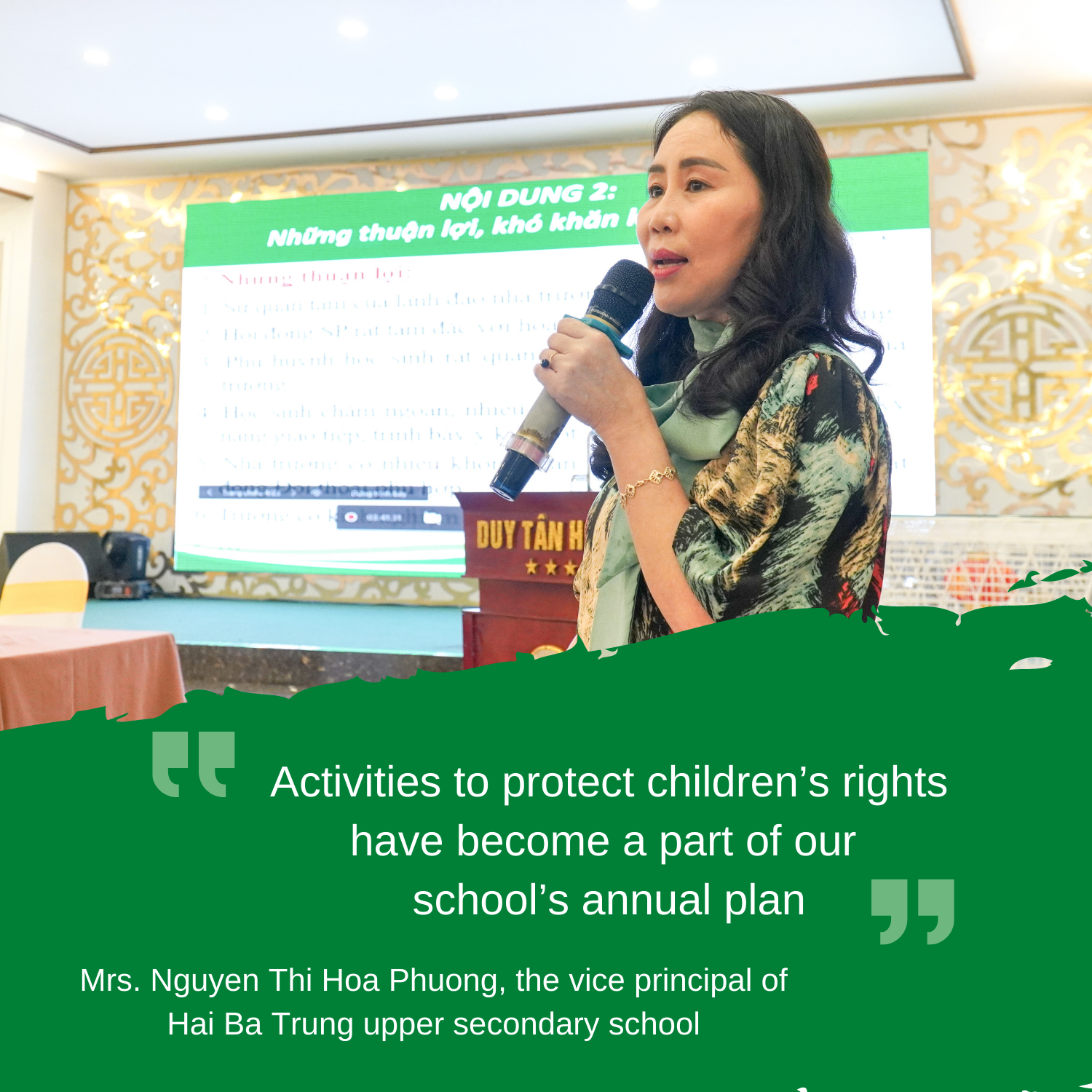 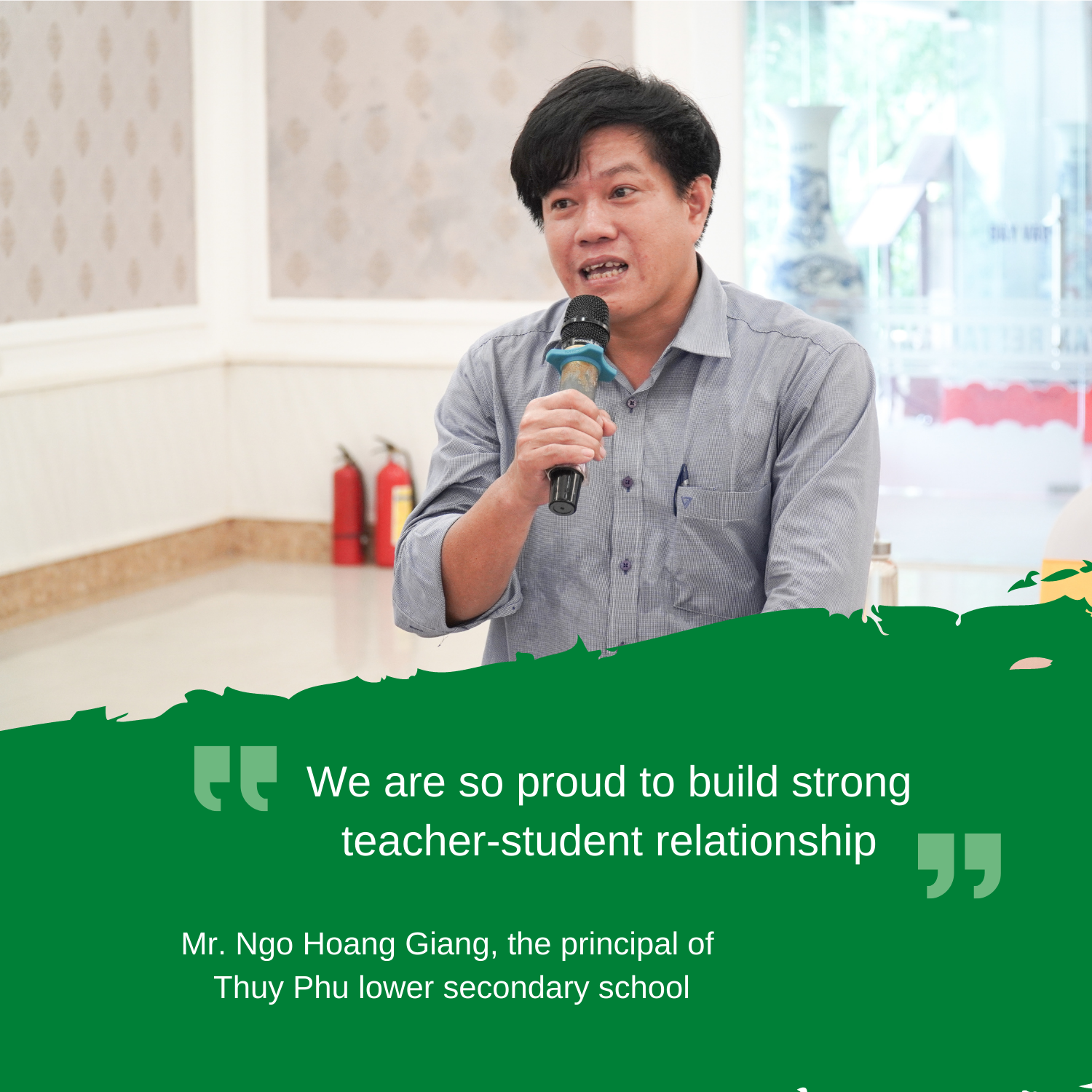 Dr. Truong Quang Hoang, the CRD’s Director affirmed that “Although the project has been finished, its mission will not stop. In the past five years, the project has built a strong foundation for the promotion of the effective implementation of the United Nations Convention on the Rights of the Child and the Law on Children of Vietnam. I strongly believe that the project achievements will be promoted, inherited and replicated for a happy life of children.” 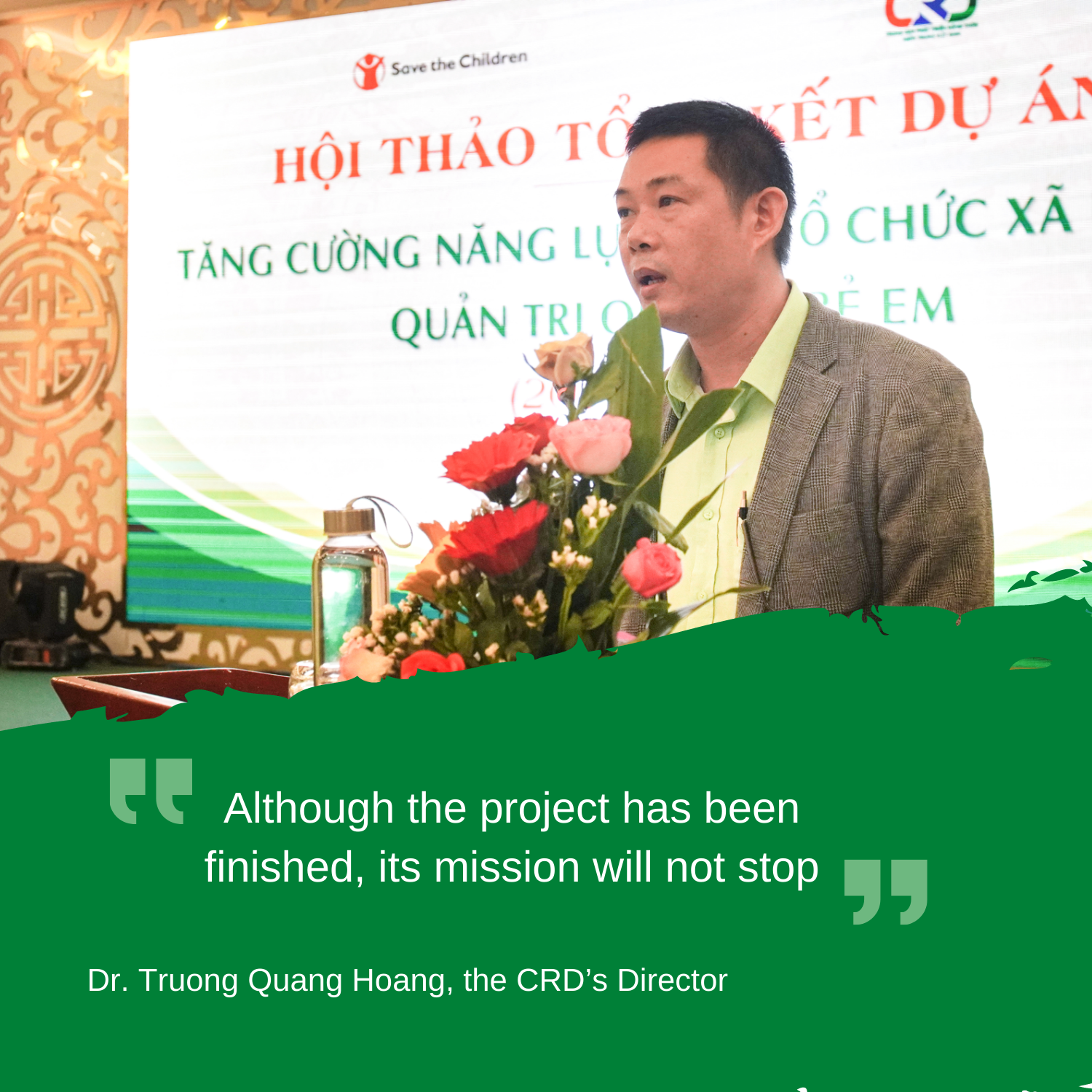 On this occasion, the project also expresses the gratitude to organizations, individuals and schools that are active members of the CCRG for having accompanied the project since the beginning. Hopefully, the CCRG will continue to work actively with the mission of promoting full and effective implementation of children’s rights in the Central Vietnam. 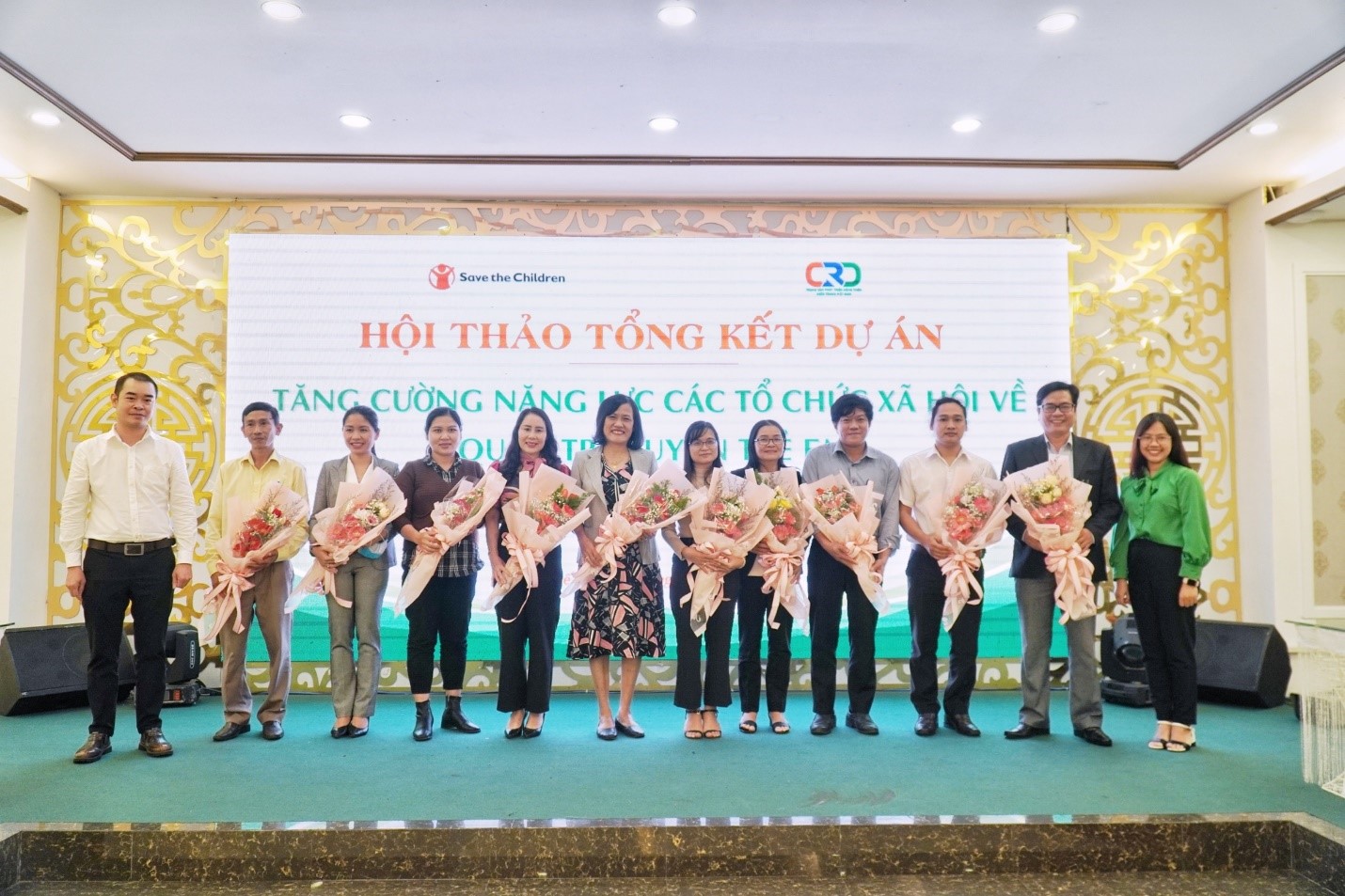